It is a natural reaction that when asked to isolate oneself from others to seek out places which are isolated or more isolated. It is no surprise therefore to see across the world one reaction to the current pandemic that, when asked to avoid social contact and to maintain social distances, some people have sought to leave the city – for second homes in more rural, less urban locations; to leave temporary accommodation and rented rooms to more to more permanent family homes; and in those case where there are still flights or long distance transport to move from one country to their homeland.

Over the past few weeks such movement has however raised eyebrows of disapproval – primarily because of the risk of spreading the virus – and in some case much stronger resentment.  The images of thousands of people in Indian cities seeking to return home in rural areas as the economic rationale for being in the city disappears with lockdowns raises questions about how those least able to afford being unemployed can look after themselves in large cities.

Although intuitive, such movement runs counter to the advocated policy of public avoidance behaviour – and might therefore be viewed as self-interest.  As Frederick Chen, based in Wake Forest University, North Carolina, interested in using game theory to model such behaviour noted “it is often assumed that agents (people) are self-interested and seek to maximise their own payoff without regard to the payoffs of other agents.”

Such pandemic and epidemic health concerns are of course not new to cities. The population densities found in cities make them fertile locations for the (relatively) rapid spread of disease, both those associated with human contact and those around poor sanitation.

The current trend in planning and urban development towards greater densification of the city is undoubtedly going to be questioned more as a result of the spread of Covid-19 (see IFC’s Donagh Horgan’s recent piece of urban density and design). But beyond the issues of urban planning there are deeper issues too about the ways in which many in cities – across the world and not just in the Global South – lack strong ties and roots. This absence leaves them unanchored in moments of crises where others grounded in local communities are able to draw on social capital and bonds to support each other.

Here in the UK, attention has been placed on the flight of urban dwellers to their second homes in more remote locations as a response to the call to isolate. The often strong opposition to such migration has rekindled notions of the ‘white settler’ movement of the 1990s. Then concerns frequently focussed on ‘incomers’  or holiday home owners skewing the housing market, creating dwelling price inflation and making property too expensive for local people. And also the seasonal demand for services that were unsustainable ‘out of season’ when they became ghost towns (Paris, 2010 – Affluence, mobility and second home ownership). Now the concern is about the potential importing of the coronavirus and the possible stress this might put on the often limited local health care facilities.

Research conducted in some counties, such as in Cornwall (see map) suggest that there are as many as 13,500 second homes across the area, with some settlements and areas having approximately a third of all dwellings in this category!  However, as the Council’s data indicates the average is only 5%. 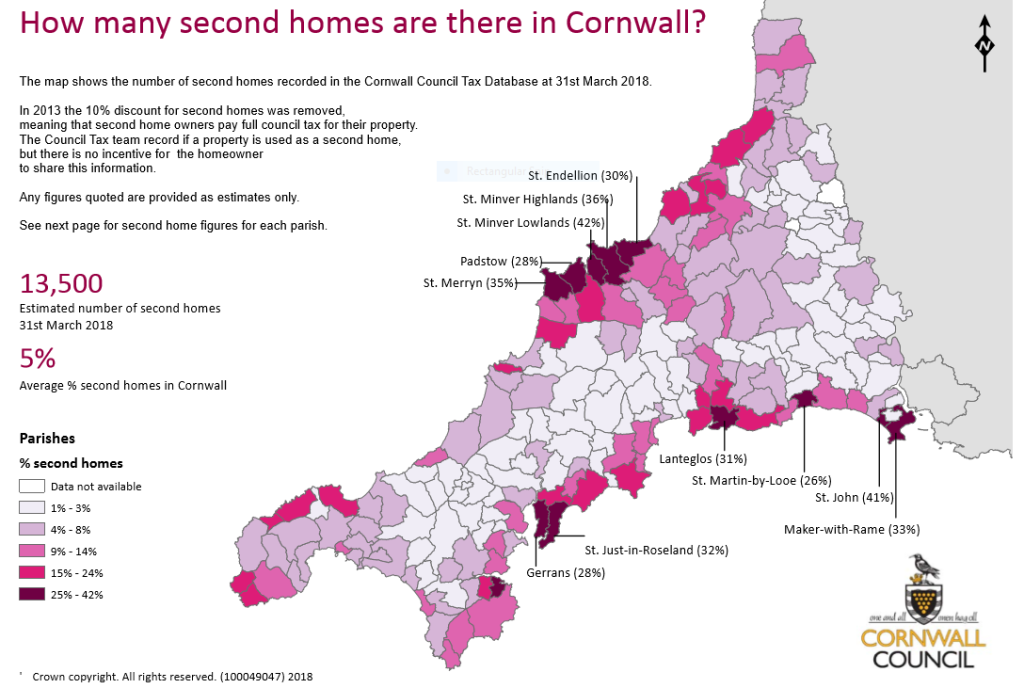 What has received less attention is that across the major cities in the UK, second home ownership is also substantial – and no less problematic than in Cornwall.  Data released just over a month ago by Statista Research Department highlighted that in London there are 49,980 second homes – 3.5 times the number in Cornwall! 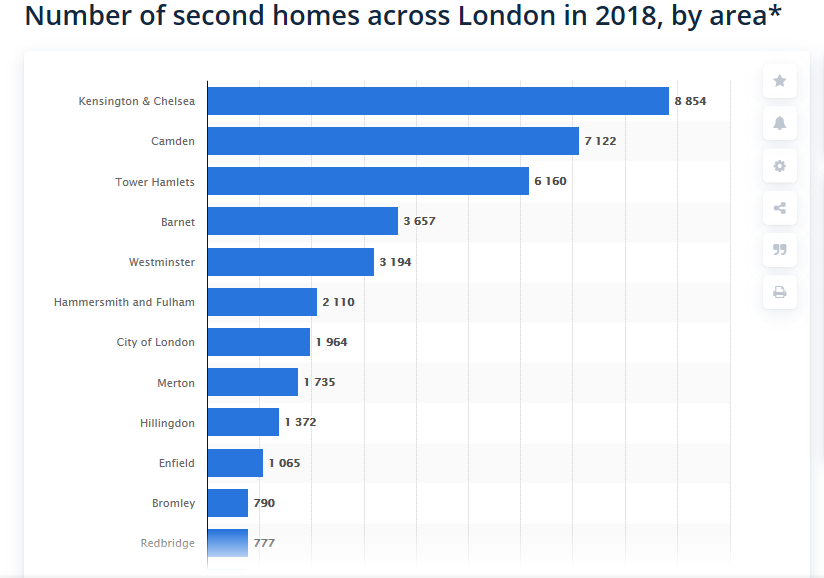 This 2018 data points to a concentration in a few Boroughs – mainly in central London – where proportions reach levels comparable to those in some Cornish areas.  The notion of ‘second home’ is complex – it includes not only those who have a ‘pied a terre’ for those working in London during the week but also property bought by the very wealthy with several homes as something for investment.

In contrast to the concern about what might be termed the socio-economic version of social distancing that has been associated with the flight to rural second homes, less is known about the impact of social distancing on those whose second home is in the city. Have they to fled the city, back to their primary residence? Are they isolating in what they view as their ‘work week’ home stuck away from their weekend primary location?

To date most attention on the variegated nature of multiple property ownership (MPO) as expressions of the increased investment function of residential property and important implications for meanings of home and housing. The current pandemic raises new questions about the nature and strength of the connections between those occupying urban based second homes and the local community, and how the experience of  ‘social distancing’ might alter this in the long term.

Dr Robert Rogerson is Academic Director of the Institute for Future Cities based at the multiple awarding winning University of Strathclyde in Glasgow, UK. He works with city authorities and academic around the world to help develop solutions to urban problems, including his current research into the Future of the City Centre (www.futurecitycentre.com )